I recently ran into a perplexing issue with some of my React based projects on Glitch. They would stall in the startup stage (package.json -> scripts -> start), and eventually the live view would simply display an error in the form of:

failed to start application on PROJECT_NAME.glitch.me

This is most likely because your project has a code error.
Check your project logs, fix the error and try again. 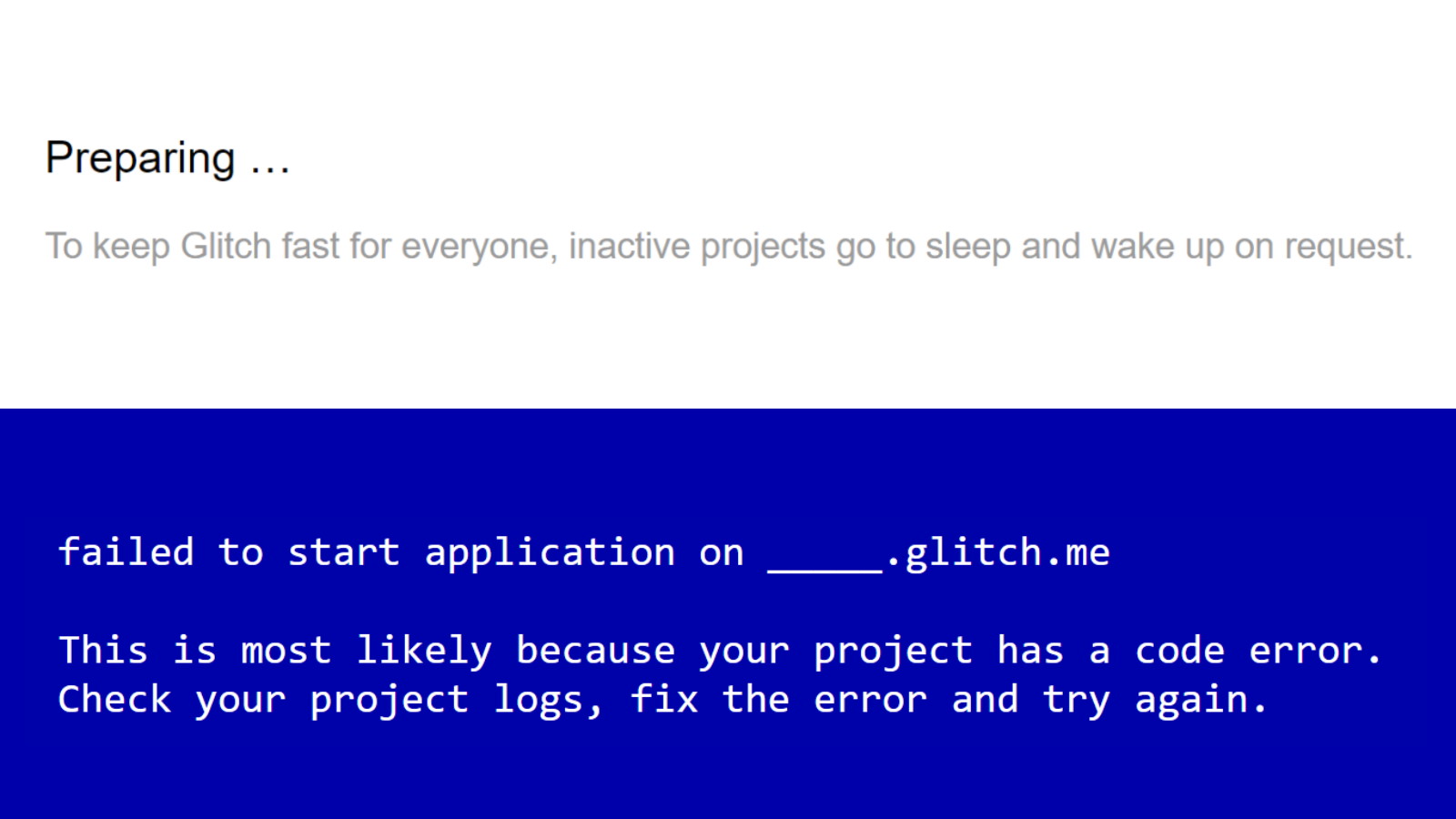 Normally, I would agree with the error message that in all probability, the issue is probably with my code. However, this was happening with old repos, that had worked before, and the final straw was that it happened 100% of the time with a brand new blank React project scaffolded with Create-React-App.

Click here to jump right to the solution. Read on for full details.

A quick search to see if anyone else was experiencing this issue brought me to two posts on the Glitch forums:

Both of those threads point to the post “create-react-app and express together on Glitch” as being the best answer to this issue.

Although the post mentioned above does indeed contain a solution, complete with working Glitch project that you can clone / remix, I personally find the solution reached to be rather complicated and overall something that founds like a substantial workaround. Not to mention, it starts to become pretty far removed from the default CRA starter…

However, after some digging, I actually found a far simpler solution. It looks like the crux of the issue might have less to do with conflicting ports, and more to do with CRA’s (and React-Scripts) reliance on having an interactive shell available (tty + open stdin).

There are tons of posts that indicate this could be the issue, including the following: – CRA GH: Issue #8688 (“Fails to start in Docker”) – S/O: React App exiting in docker container with exit code 0

I can’t find Glitch’s Docker config to see if they have TTY turned off, but it certainly would line up with the results I’m seeing. And the fact that this appears to be a newer change to CRA, which would explain why repos using older versions of react-scripts still work.

Thankfully, someone on the thread for issue #8688 identified an easier solution than rolling back CRA scripts or changing the Docker config (which would be impossible on Glitch). In this comment, they mention using CI=true to set the environmental variable CI to be true.

To clarify, CI stands for “continuous integration”, and in the context of React, this is important for automated testing. Setting CI=true is meant to be used when running tests, for a proper setup. However, it also makes sense that it would work for the tty issue, since setting CI=true likely also forces React into a non-interactive mode that does not require an interactive shell, since many CI pipelines also lack an interactive shell for executing automated tests (reasonable).

If you need to set CI=true for Glitch, that could be as easy as changing your start entry from react-scripts start to CI=true react-scripts start. However, that is going to disable the interactive mode of CRA everwhere, not just on Glitch!

If you want to only apply the fix only on Glitch, there is another trick up my sleeve for you!

You can take advantage of the fact that Glitch sets certain environmental variables within it’s own system. For example, this will work right now to only apply the CI fix on Glitch:

An even easier fix is to use a tool I built that takes care of checking the environment for you – “detect-is-on-glitch”. With that tool, the entire command above could be shortened to:

Plus, my tool scans multiple environmental values, works across multiple OSes, and I’ll update it if Glitch makes changes that stop certain variables from being exposed.

WARNING: the CI=true syntax will fail on Windows – see section below for details.

WARNING: The CI=true is the Unix / bash syntax for setting environmental variables.

If you want a way to set environmental values across all operating systems, you will need to add cross-env as a dependency, and then change CI=true to cross-env CI=true.

If you are reluctant to edit your package.json to accommodate Glitch, an alternative solution can be to use glitch.json to tell Glitch to use the special start command. However, this takes some extra configuring; you would have to find the global path of NPM (or pnpm for Glitch, likely), setup a shell script to call react-scripts with CI=true, and then point glitch.json at the shell script.

If you really want to go down that route, make sure you review my Glitch guide, and in particular, the Troubleshooting section.

I put together a quick demo / starter repo, generated from Create-React-App, and configured with my fix for Glitch. Source code is on GitHub, and the live Glitch is here.

Even if the above does not work for you, and you are convinced it is an issue with conflicting ports, you don’t have to roll your own proxy code like they did in that linked post. There is actually a built-in feature in react-scripts that will take care of it for you; all you have to do is declare the proxy destination in package.json -> proxy field. This will proxy all unknown (e.g. non-static files and routes) to the defined proxy.

For example, to proxy all non-static requests to port 3001, use:

You can find the docs on this feature here, and Dave Ceddia has an excellent writeup on using it with CRA + Express.

NOTE: You can also use environmental variables to change the port dev server listens on (with PORT=#) and the host it is bound to (with HOST=___). Refer to the advanced configuration docs for details.

Instructions on how to delete multiple files based on a pattern, even when nested, with SHX and ShellJS. Extra tips…

How and why to use OS temporary directories to create files outside your source code directory for scripted tests.